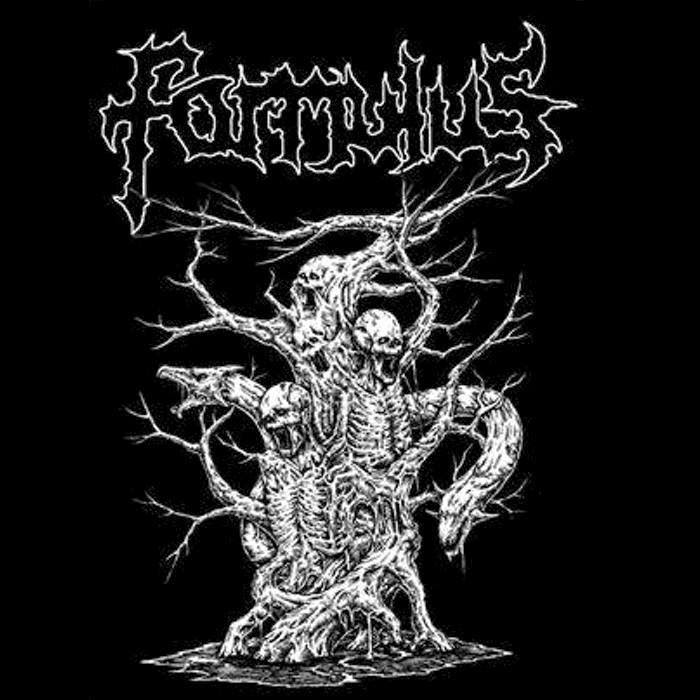 Extreme Metal Empire: Introduce yourself and what is your role in Formulus...

EME: Name all the other members of Formulus and their roles...

TM: We will begin with Hal "Hellhammer" Hamner who was the first musician ive formed a band with. He contributes by helping me write some of the material,lyrically,musically and conceptually. Also enhancing things by bringing to the table nightmarish vocals,unique style,and great bass skills.

Next in line will be Brad Killingsworth aka Heinous Lurker.
We hooked up with him through another local band in our area.He is a very solid rhythm/ lead guitar player with a classical background. Along with that he offers musical,lyrical and conceptual input. He brings to the table a straight forward attack that is an integral part of our style.

Lastly our newest addition is David "Pulverisor" Breazeal on the drums. Drummers have been a curse for me and the other members of the band since its inception.Since his addition,things have been nothing short of amazing. With the benefit of his prior experience with touring bands,(Unholy Ghost, Cauldron, Pessimist) We are preparing to do things we have only thought of as "in the future". We have yet to record anything with him playing with us but his presence will be undeniable in our future endeavors.By far,one our most accomplished musicians and fits in to our style and ideas like hes always been a member.

TM: The sound we try to achieve is basically one of mid-80s early 90s death metal. We take our influences from bands like Black Sabbath, Iron Maiden, Nile, Immolation, Morbid Angel ,Gorguts, Death, Athiest, Oppressor, and thrash bands such as Slayer, Coroner, Destruction, Demolition Hammer, older Sepultura, and Kreator. We hand-pick ideas from this and some newer age influences and turn them into the ultimate Formulus for our sound.

EME: Who are some newer bands that you guys are into?

TM: Koroidia, Nader Sadek,Cannabis Corpse,Grave Miasma,Dead Congregation, Corpsessed, Haunt, Dim Mak, Hannes Grossman, Ulcerate, Obscura, Ectovoid, Portal. Keep in mind, something that may be newer to us ,may not be as new to others. "newer age"

EME: What is the meaning of the name, Formulus?

TM: The name Formulus means the ultimate death metal formula. An amalgamation of all of the bands the band members truly enjoy.I think thats also why none of our songs really sound the same. Each has a little bit of different influence added to them all.

EME: You guys are from Alabama. Not many people equate Alabama with extreme metal. What's the scene like there?

TM: Alabama as a whole has its high and low areas in my opinion. Birmingham,which is close to me has lots to offer with local bands like The New Masters Of Evil, Ectovoid, Condukator,and Avavago. We get a few decent shows that come through with some regularity, but its the locals regardless of locale, that fuel the scene.

EME: Explain the song writing process of Formulus. How does it all come together?

TM: Some songs are written by single band members and brought to the table written and enhanced by all of the members in their own way. It can take awhile to really have them the way we want or through playing them repeatedly ,new ideas never cease to arise. We also work on collaborating by mixing riff and movement ideas per the tone of the song. Each member has their own input ,be it riff,harmony or structure. For me personally ,dynamics are one of the biggest attention-getters. The how,when, why, and where to put certain parts. Structure can make or break the quality of a song.

TM: We never write about the same thing twice. Sometimes we write darker toned stuff such as "Father of Disease" about the corruption of religion. The current songs we have are "ManGodMachine" about being 18 and drafted/forced to go from normalcy to vietnam and being told to kill or be killed. Also the profound negative effect it can have on the human psyche. There is "Fungal Pathogen" which is about the cordyceps fungus that controls the mind of its host to serve its will until eventually taking over and killing it. Of couse there are more, but lastly there is "Blood of the Nile" which was intended in a way to be epic and heavy like that of the band Nile(sort of a tribute) .It is about all the Nile river and the timeless secrets it must hold as a source of life and death for ages.I try and write thoughtful,intelligent lyrics that aren't always "satan" or "blood and guts" based as the stereotypes would depict.

EME: What has been the fan response so far?

TM: Considering we've only been in action for about a year and working with a lo-fi recorded demo, I'd say the reaction/response has been pretty good. We've had well over 1000 downloads of our material, thanks to support and sources other than our own. A huge shout out here from us to the Stillborn Twins net label as well as Torn Flesh Records who have aided us in promotion, videos and even this interview. We just exceeded 1000 on fb as well. We have dealt with a lot of adversity since our beginnings, travelling an hour or more to make practices happen. line-up changes, and travelling an hour or better to make shows happen. We've had the honor of playing with Solstice, Hellwitch,and Goatwhore and many other touring and local bands from around the nation. For a band from Alabama,these are accomplishments that cant be denied.

EME: Agreed! You mentioned playing shows. What can one expect from a live Formulus performance?

TM: Full on frontal attack! A little hype, a little comedy, haha and raw fucking intensity! You can always do better, Intensity breeds intensity. If you are able to ignite the crowd, the better the crowd will perform for you. Its symbiosis. We are constantly moulding, shaping, and improving upon what we do. It is not simple music that we and so many others like us play. Concentration, live and practice, is the ultimate key and even that can be difficult with long-distance members and lives outside of the music,which unfortunately,are the necessary evils of the style/genre we choose,love and support.

TM: Unfortunately, this isn't New York, Atlanta or California and we are 100% underground as is most of our genre. All of the shows can't be on Friday or weekends and turnout is very relative to timing and location. Birmingham has the biggest fan-base for us locally and the better scene for metal in our experience, with lots of local bands and supporters. I can say this with confidence, when people know we will be playing the show, by and large,they show up. Also it seems that everyone is inside anticipating our delivery. Its a good feeling. There have actually been a couple of autographs signed,haha amazing.! We've worked hard to get a name and a following, regardless of size. If one person shows up and genuinely enjoys what you do, mission accomplished.

EME: Any plans for touring or playing shows out of state? 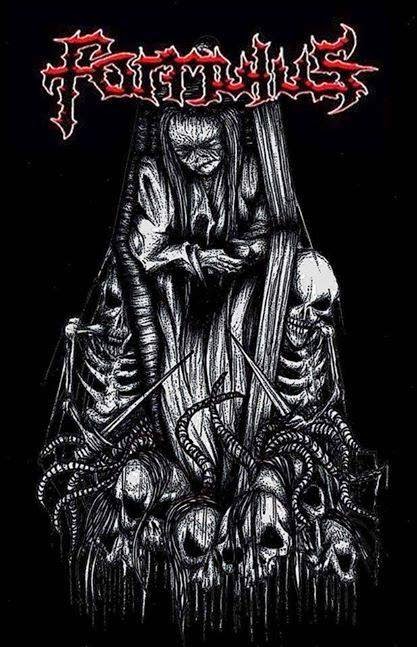 TM: We are looking into doing some small scale touring so to speak this year. As I've said, unfortunately we have to have jobs and they don't like it when you make anything else more important, haha. At the same time we are very interested to see what other area scenes have to offer. We want to spread our madness like the plague. With the addition of our new drummer, who's motivation is as large as our own, I can only see bigger and better things happening for us in 2015 on all levels. It takes dedication, connections and money on a high-level to produce these things.We strive to achieve the best we can always.

EME: Any new material in the works?

TM: We have lots of new material written and ready to start working on ASAP. Since acquiring our new drummer, we want to play some shows so we've been teaching him all of the current stuff. As soon as we get those show -worthy, it will be time to focus on new stuff, quality demo and out of our area shows. What's to come will be face-melting, raw, straight up death metal from the deep south haha!

EME: What do you guys enjoy doing when you're not creating music?

TM: In my spare time I watch a lot of movies, new and old. Fishing is also an important part for clearing the mind as welI. I Imbibe tons of music to find that certain concept or idea that can be Formulus-ized. I also go to lots of local shows to give them the support they deserve. I have a crappy job that must be maintained and a great wife who supports what i do wholly. As of late, we even practice in my living room,haha! As for the other members,i can give a brief description as i understand it. it should be accurate enough. (Brad Killingsworth)our other axeman is a music junkie and gearhead and avid pro-wrestling fan. He is constantly listening to music, more than just metal. He likes to support by purchasing merch from bands he finds interesting, be it local area or otherwise.has an extensive guitar, metal shirt and music collection( as do i). We are constantly showing each other new things musically that the other hasn't caught. We live an hour apart and still get out together to catch the local shows. He has a job he doesn't care for as well but has to be done. Also has a wonderful family that he spends his quality time with. Next in line is (Hal Hamner), being the youngest member of the band he has the most free lifestyle. Currently unemployed,yet seeking a job, he has a a lot of time to spend with his bass. Most definitely a bass player's bass player.He also enjoys hunting and fishing and spending time with his daughter.
Lastly, is our new drummer David Breazeal. Being a recent addition I know a little less about him entirely. David owns a tattoo shop and is a good artist. Also has a diverse array of musical tastes. He builds hot rods and restores vehicles as well. In addition he has 4 spawn that are an important part of his life.

TM: Formulus would just like to say thank you to all of those who have given us support over the past year. Be it bands, fans, labels or otherwise. We can't thank you enough and you know who you are. Keep an eye on the dark horizon for what we will have to offer in 2015.

Personal recommendations from Tyrannical Malefactor to check out;

The New Masters Of Evil
https://www.facebook.com/TheNewMastersofEvi 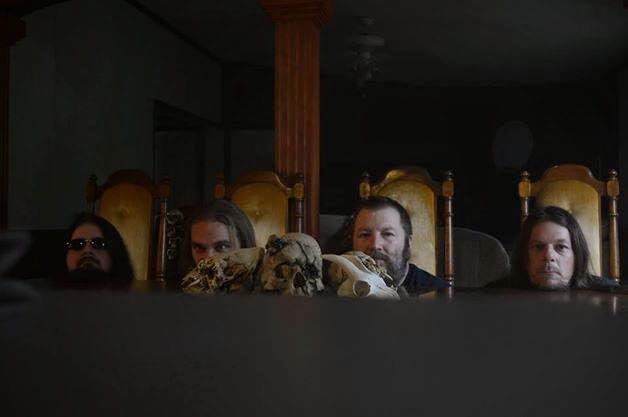